Sun, Sea, Sand and Sport on the Bridgewater Trip to Malaga

During the summer, one of our groups documented their entire tour to Malaga, here’s what they had to say about their time in sunny Spain;

On Sunday 16th June, 49 Bridgewater 11-14-year-olds and 5 staff assembled at Manchester Terminal 3, to fly to Malaga for a football and netball based tour.

Despite the early start, everyone turned up in their blue hoodies, and all had brought their passports, EHIC cards, money, and luggage! The dreaded 10kg limit on luggage, fortunately, was not an issue and everyone passed through the automated system successfully and much to our surprise! Fortunately, the extra four sports bags of 20kg each proved to be vital to carry the essentials – football boots, trainers, toiletries and of course hair curlers?! The only real drama was when Dante lost his passport for a few minutes and Lily dramatically slumped to the floor as she boarded the plane.

The flight was easy enough, aided by iPad’s, smartphones, women’s health magazines (thanks for that Mrs. Acton!) and of course a copious amount of sweets and crisps (thank you, Ethan!). Luggage collected, our rep Angelo met, and an hour later we arrived at the Hotel Atalaya Park Golf and Sports Resort. With rooms allocated and bags unpacked there was just time for a bit of a chill out in the splendid pool, before congregating at “the sofas” to meet for tea. It has to be said, the quality and variety of the food on offer was quite over-whelming and everybody filled up on pasta, fish, meats, salad, cakes. Some decided to sample the local paella and others tucked into their first of what was to be a “real of cheese”.

An evening stroll along the beach to watch the beautiful sunset brought to a close a charming first day, and all went to bed to get some sleep ready for day two and the training sessions.

Day 2 started with a 7:00 am wake up call for a dozen or so yoga enthusiasts, who met their instructors Acton and Reynolds for a session beside the beach. Following a delicious breakfast, the girls met at the netball courts for their 90-minute coaching session, whilst the boys took a short walk to the picturesque football pitches to meet our Malaga FC coaches, Alberto and Carlos. The boys were put through some passing and control drills with the emphasis on receiving the ball on the back foot to create options for the next touch on the ball. Alberto also introduced the “Pencil Theory” that proved to be a subtle and intelligent way to stress the importance of practice and repetition in developing life-long good habits.

Following a tasty lunch, both netball and footballers were given recovery time around the pool. The girls had an extended break as the two boy’s teams, plus Molly set off to play the U12’s and U13’s FC Sportscab. The opponents were all from local international schools, with English, Irish, Italian, Spanish and Croatian players. They all had one thing in common however they were all well drilled in the Spanish way of playing football, with the ball doing most of the work in the hot conditions. The U13 team started really well and Imran hit the bar early on with the score at 0-0. Imran went on to score four goals with his pace proving difficult to deal with. However, FC Sportscab where the better team and more accustomed to the heat, and despite the heroics of Thomas in goal, a 1-4 loss could not be avoided. The U12 team fared better overall but found the heat hard to cope with as the game wore on. The boys had enough energy left after a delightful tea to join the girls in games of beach netball and rollerball, as the sunset on another lovely day in Estepona.

The next morning, Miss Reynolds led a dedicated small group of girls in a gym circuit at 7:15 am. Following a healthy breakfast, all set off for their respective football and netball training sessions. The Malaga coaches concentrated on making the right decisions during 2v1 and 3v2 attacking situations. The netballers had arranged some extra game sessions later on before tea, giving the boys an extended recovery period around the pool. Another scrumptious evening meal left many feeling pleasantly lethargic, and it was left to the Hotel Magic Show to entertain all before bedtime. 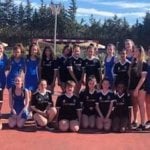 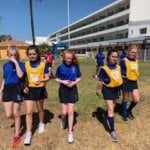 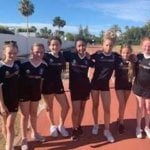 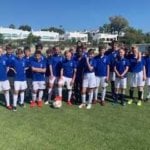 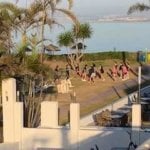 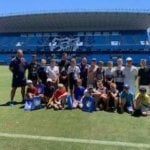 The intensity of training was stepped up and the program for the day was equally full-on. The netballers had a fabulous day at training and playing against a visiting ISA school from West Yorkshire. A truly amazing performance in our first netball game in Europe resulted in a 9-8 win for the U12 team against Fulneck School. Isabella ran the game from the centre, Grace provided defensive stability, Lily enthusiasm whilst Lola was lethal under the net. Miss Williams had the girls all drilled to perfection during the training sessions and this was clear to see in the games.

The U14 team lost narrowly to Fulneck School in a closely fought match and followed this up with a dramatic 17-14 defeat to Hollywood School. However, the U12 team remains unbeaten in Spain as they battled to a 14-14 draw with the Hollywood School in a thriller of a game that had drama, suspense, action and the odd bit of comedy?!

The two football teams had a shorter training session to loosen up, before games against Fulneck School, West Yorkshire. The teams were mixed up to play 9 v 9 games, and both teams were to experience their first wins on the tour. Imran again scored four and Alfie P and Zane scored to give the team a 6-4 win in the first game.

In the other game, Bridgewater quickly found themselves 2-0 down very early on before goals from Warren (was it a cross or a shot?) and Alfie F levelled the scores at 2-2. However, in the second half, Bridgewater started to put the Malaga coach’s philosophy into play, creating scoring opportunities at will. Alfie F and Warren scored again, whilst Declan scored one and had a brilliant free-kick saved in the last minute. The boys returned to the hotel in high spirits and changed quickly before heading off for a tour of the Rosaleda Stadium, the home of Malaga FC.

A guided tour of the stadium included the history of the club, a museum visit to see the club trophies over the years, a chance to sit in the media area, entrance into the players changing room and a rare opportunity to go pitchside. We also found ourselves sat in the directors and presidents of the club’s seats whilst watching a corporate game involving the ground staff, judging by the pace of the game and the shape of the players. Before returning to Estepona, the club shop provided some shopping respite for the boys, and a meal at a local Spanish restaurant for that famous local dish… pizza.

As if this was not enough action and adventure for one day, both teams had a game to play at 6 pm. The U13 team took on Estepona FC and were involved in an end to end thriller that both teams gave their all to try and win. In the end, four more goals from striker Imran secured a 4-4 draw that both teams will feel they could have won, but will be happy with the result. In the U12 game, Bridgewater took on Los Compadres FC. Despite running out of energy in the heat in the dying stages of the game, the team produced a tremendous display that in English conditions would have seen them win the game.

Kynan was a rock at the back, Matthew worked tirelessly in the midfield and Alfie F ran the defenders ragged. The final score was Bridgewater 3, Club 4, with goals from Alfie P and two from Archie, one of which was a rocket of a free-kick from the halfway line, which is one of the best strikes of a ball anyone will ever see!

On day 5 the netball and football training sessions came to an end, with a chance to play against each other in friendly tournament matches. Declan and Thomas took the honours in the “Champions League” style 2v2 competition, whilst the netballers enjoyed their final session in the sun and said goodbye to the other schools and their coaches. That only left the afternoon to fill, and the much-anticipated trip to Aqualand! The coach fell silent as we passed the waterpark in Mijas, but the excitement reached fever pitch when we arrived at the one in Torremolinos. Wave pools, slides, shoots, lazy rivers, waterfalls, swirling basins, donut rides, and kamikaze slides ensured everyone had an amazing time. We did, however, suffer our first injuries of the tour, with Eloise spraining her ankle on a water-slide and a flying tray waking Mr. Smith up… much to the amusement… sorry, the dismay of Mr. Altdorf! Nevertheless, this was another fabulous day and an excellent way to round off the tour.

On the final day, those who had packed the night before took the opportunity to have a swim in the pool for one last time. There was just enough time for a quick shop at the local shopping complex near to the airport. With a search party gathering to find Mrs. Acton and her group, the happy shoppers returned just in time and we all set off to the airport.

All in all, everybody can safely say that their experience in Spain was a wonderful one and will have memories that will last a lifetime.  The hotel was lovely, the food excellent, whilst the sports and recreation program was well planned out to guarantee sufficient time for work, rest and play. Thank you to the staff, coaches, hotel staff, inspiresport and all Bridgewater students and parents for making the trip happen.

Five new picks for England U19 squad: Inspiring the English Schools Football Association and beyond
24th October 2019
This website uses cookies to improve your experience. We'll assume you're ok with this, but you can opt-out if you wish.Accept Read More
Privacy & Cookies Policy
Necessary Always Enabled