Take a look what Kapil Sareen, the Party Leader for SportyBeans had to say about their recent UK Tour!

SportyBeans academy from India took 16 boys from their under 13 squads for a 10-day football tour to the UK to Manchester City FC in the last week of October 2019. Our boys were lucky to be the first club from India to get an opportunity to train at City Football Academy. The team was accompanied by two coaches and a few of the parents.

The tour organisation by Inspiresport was impeccable, from being received by the rep Pablo(who was super helpful, thoroughly professional and always smiling throughout the tour) at the Manchester International Airport, to the accommodation, the quality of the infrastructure, coaches and training at the CFA, the coach service provided, the organisation of friendly matches, the Etihad Stadium tour, a fun-filled 2 hours at the Fan Zone and to top it all the live ManCity Vs Southhampton game; the tour was a once in a lifetime experience not only for the 16 players but also for the coaches and parents who travelled along – all thanks to Inspiresport !

Post the 5 days of training at Manchester we traveled to St. Georges Park and spent a night at the Hilton Hotel. The next morning the boys enjoyed two hours of outdoor laser tag before heading for a tour of the football centre and a training session with the FA coaches. 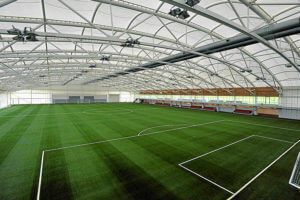 Later that evening we traveled to London for two days of fun, shopping and sightseeing.

The entire tour from the training to the matches and the entire experience has been a dream come true for the squad, who, even before we left, were already asking when will they be back!

A big Thank You to inspiresport for helping us create memories for a lifetime and “inspiring the next generation”. 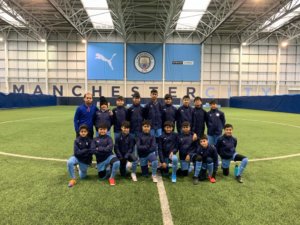 ‘The coaches at City Football Academy were outstanding with the kids and I hope that their professionalism and compassion rubbed off on our kids. There was a significant improvement in their play on the field and their overall attitude.  The training and friendly matches were really exciting for the boys.

The entire experience has been a memorable one not only for the kids but also for the parents who came to support these children.’