One of Spain’s most successful clubs, Villarreal CF has one of the best youth training set-ups in Spain, making it the perfect destination for a school or club sports tour. Receive top class training at Club facilities and Villarreal’s full time professional club coaches, with courses adapted to the requirements and ability level of your group.

Go Behind the Scenes

On top of world class training, inspiresport groups also get the opportunity to watch first team and youth team training sessions (subject to match and training schedules) and receive a behind the scenes tour of the magnificent El Madrigal Stadium. This is an opportunity not to be missed, so don’t delay and make Villarreal CF the location of your school or club’s next football tour!

``The students loved the tour to Villarreal CF and built up great relationships with each other, the teachers and the Spanish Reps``

``No-one back at school will understand just how great the week was- two La Liga fixtures, friendly professional players, charismatic skilful coaches, a rep prepared to work tirelessly and a group of boys having the time of their lives. As one boy said – ‘surreal’. Oh yeah, and the sun shone every day and we swam in the Med``

“Well done to all 83 students that represented the school @inspiresport Villarreal Football tour. A great trip”

Your Villarreal CF Tour Will Include

Villarreal Club de Fútbol, usually abbreviated to Villarreal CF or just Villarreal, is a Spanish football club based in Vila-real, a city in the province of Castellón within the Valencian Community. Founded in 1923, they play in the first division Liga BBVA, commonly called LaLiga, holding home games at Estadio de la Cerámica, with a capacity for 24,890 spectators. The club is nicknamed El Submarino Amarillo (Yellow Submarine) due to its yellow home kit. Villarreal has often been touted as an example of small yet friendly open and successful club. 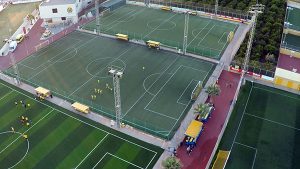 All Villarreal CF teams from 7 years old to the first team train at Camino Miralcamp complex. The complex is also home to the main club office administration as well as the living quarters for the clubs top academy players. The facilities include

The training complex is always open to the public and with the relaxed social atmosphere players seem to join in with the friendliness of the club and are happy to take time out for the fans.

Vila-real is the second biggest city in the Castellón province of the Valencian Community and is located 5km from the Mediterranean shore. Both El Madrigal stadium and the Ciudad Deportiva (Villarreal CF Training Ground) can be found in the city; with the Yellow’s home pitch situated in the city centre, while the training facility resides on the outskirts (5 minutes from the stadium).